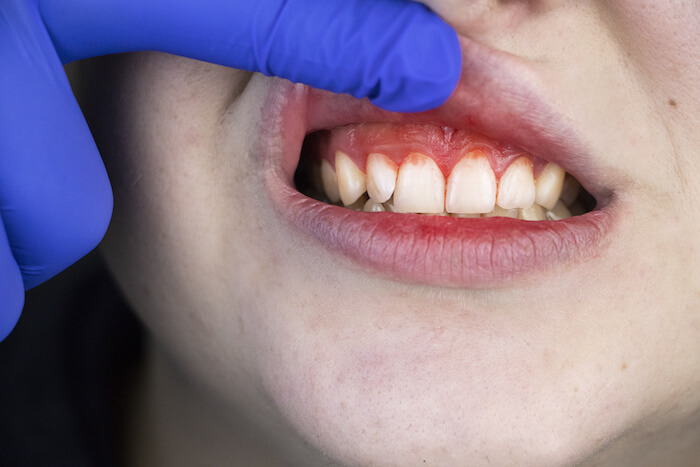 You're excited to start your Invisalign treatment and finally get the smile you always wanted. But, soon after you get your first set of trays, you notice that your gums have started to bleed.

Keep on reading to find out the answer!
‍

While it's not a general rule and it doesn't happen to everyone, some people will experience gum bleeding when wearing Invisalign, especially when they get a new set of trays.

Don't worry! Although uncomfortable and a bit alarming, this is actually normal. The bleeding occurs because of the pressure the trays put on your teeth, forcing them to move into their correct position. As your teeth shift, the surrounding gums and tissues are exposed and it takes them a while to adapt to the new position of your teeth.

As we said, gum bleeding while wearing Invisalign doesn't happen to everyone. If you are experiencing this problem, you may notice that your gums are bleeding only for a few days after getting a new set of trays and it's usually more intense if you talk a lot.
‍

What Can You Do About It?

There's nothing you can do in particular as this nuisance usually resolves itself in a few days. However, it's important to maintain good oral hygiene so you don't allow any bacteria to sneak in under the gums and affect your oral health.

So, as a general rule, try to:

When Should You See a Doctor?

Minor gum bleeding when using clear aligners is normal and to be expected. It can take a few days for your gums to get used to the new location of your teeth. But, if you notice that the bleeding is not going away or it's getting worse, then you should get in touch with your dentist.
‍

Do you want to straighten your teeth but without the hassle of wearing metal braces? Moonlight Beach Dental can help you.

‍Contact us right now to book your appointment with one of our doctors.

Dive Into A Life Of Wellness